Donald A. Glaser (1926–2013) was one of the 20th century’s most innovative and versatile scientists, opening new fields of both physics and biology by combining theory with engineering. In 1952, he invented the bubble chamber, which revolutionized particle physics by enabling physicists to observe the motion of exponentially more subatomic particles. Glaser received the Nobel Prize for it in 1960.

Glaser then catalyzed the growth of molecular biology by devising several machines—with colorful names like Dumbwaiter and Cyclops—for automating experiments with microbial cultures, and by cofounding the first biotechnology company, Cetus, in 1971. From the 1980s into the 2000s, he turned his attention to visual neuroscience.

Glaser studied at Caltech with Nobel laureate Carl Anderson in the 1940s, then became a professor at the University of Michigan. In 1959, Glaser joined the University of California, Berkeley, where he spent the rest of his career. 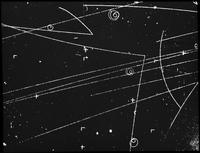 The Donald A. Glaser Digital Collection presents two physical collections of Glaser’s documents, photographs, audio, video, and objects, owned by the University of California and Caltech, as a single virtual collection, making the thoughts and insights of this brilliant scientist easily accessible. UC Berkeley’s Donald Glaser Papers are on indefinite loan to the California Institute of Technology Archives.