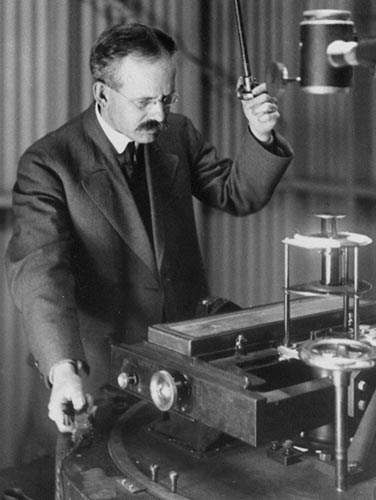 George Ellery Hale (1868–1938) was an influential astrophysicist and science administrator. This collection of Hale’s scientific, professional, and personal papers documents his roles in inventing the spectrohelioscope, promoting international cooperation among scientists, and founding major observatories and other scientific institutions.

After receiving his B.S. from MIT in 1890, Hale quickly established a scientific reputation for his invention of the spectroheliograph, then made important contributions to the study of solar phenomena, organized and coedited the Astrophysical Journal, and led the design, funding, and construction of the Kenwood Observatory in Chicago, Yerkes Observatory in Wisconsin, Mount Wilson Observatory near Pasadena, California, and Palomar Observatory near San Diego. These observatories hosted the world’s largest and most sophisticated telescopes.

The Caltech Archives, in collaboration with the Huntington and the Carnegie Institution, published this web edition of the Hale Papers on the 150th anniversary of Hale’s birth. You may navigate it by selecting a folder to view using the collection guide, by browsing the same guide in the Online Archive of California, or by searching the full text of all typed papers using the search box above.